Roth Conversions: When Should You Convert Your IRA or 401(k) to Roth? 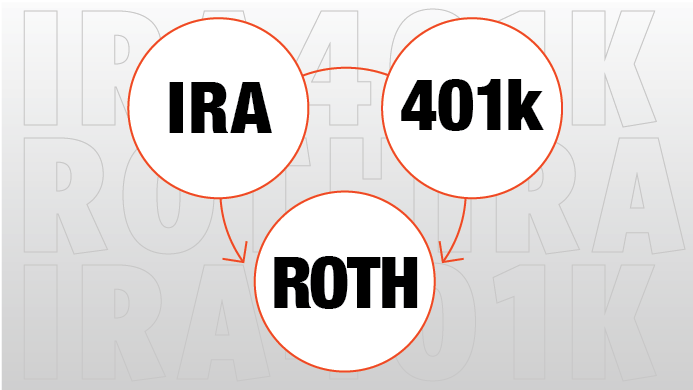 Roth conversions remain popular as many fear that tax rates will only increase in the next few years, so why not convert now at lower tax rates and let the account grow and come out tax-free at retirement. Remember, if you have a traditional IRA or 401(k), then that money grows tax-deferred, but you pay tax on the money as it is drawn out at retirement. If you have traditional dollars where you obtained tax deductions for those contributions, you then have to pay tax on the amount you want to convert to Roth.

When you are contributing you get zero tax deductions on Roth IRA and Roth 401(k) contributions but they grow and come out tax-free at retirement. What’s better? Well, in the end, the Roth account is a much better deal as you’re pulling out what you put in AND the growth of the account after years of investing and saving. That’s likely a larger amount than what you put in so you’d typically be a better-paying tax on what you put in (or convert) rather than paying tax on the larger sum that you will take out later. The trade-off, of course, is you’re playing the long game. You’re skipping a tax deduction or paying tax now to convert in return for tax-free growth and tax-free distributions at retirement. The Roth seems to be the better deal. Yet, most Americans have been sucked into traditional IRAs and 401(k)s because we get a tax deduction when we put the money in a traditional account, saving us money on taxes now.

For more on the differences between Roth IRA and Roth 401(k), take a look at the video from my Partner Mark J. Kohler:

The good news is that you can convert your traditional IRA to a Roth IRA, or your traditional 401(k) to a Roth 401(k). The price to make that conversion is including the amount you convert to Roth as taxable income for the year in which you make the conversion. So, if I convert $100K from my traditional IRA to a Roth IRA in 2020, I will take that $100K as income on my 2020 tax return, then pay any federal and state taxes on that income depending on my 2020 tax bracket. Many retirement account owners want to move their traditional funds to Roth, but don’t like the idea of paying additional taxes to do so. It can be a big tax hit when you do your taxes. I get it. Nobody likes paying more taxes now, even if it clearly saves you more as your account grows and the entire growth comes out tax-free.

One way to soften the tax blow of the Roth conversion is to chunk the amount you want to convert over two or more years. For example, if you are at the end of the year in November 2020 and you want to convert $100K to Roth, you may decide to convert $50K by December 31, 2020, to have that taxed in the current year and then convert the remaining $50k on January 1, 2021, to have that amount taxed in 2021. This way, you don’t have as much of an income swing and it spreads the tax due over the two years. You could also do $33K each year to spread it out over 3 years.

The following are three cut-and-dry situations of when you should definitely convert your traditional IRA or 401(k) funds to Roth:

1. Up-Side Investment Opportunity – I’ve had numerous clients over the years convert their traditional funds to Roth before investing their account into a certain investment. They’ve done this because they’ve had a tremendous investment opportunity arise where they expect significant returns. They’d rather pay the tax on the smaller investment amounts now so that the returns will go back into their Roth IRA or 401(k), where it can grow to an unlimited amount and come out tax-free. These clients have invested in real estate deals, start-ups, pre-IPOs, and other potentially lucrative investments. So, if you have an investment that you really believe in and will likely result in significant returns, then you’re far better off paying a little tax on the amount being invested before the account grows and returns a large profit. That way, the profit goes back into the Roth and the money becomes tax-free.

2. Low-Income Year – Another situation where you should convert traditional funds to Roth is when you have a low-income tax-year. Since the pain of the conversion is that you have to pay tax on the amount that you convert, you should convert when you are in a lower tax bracket to lessen the blow. For example, if you are married and have $75K of taxable income for the year and you decide to convert $50K to Roth, you will pay federal tax on that converted amount at a rate of 15% which would result in $7,500 in federal taxes. Keep in mind that you also pay state tax on the amount that you convert (if your state has a state income tax), and most states have stepped brackets where you pay tax at a lower rate when you have lower income. If you instead converted when you were in a high-income year, let’s say $250K of income, then you’d pay federal tax on a $50K conversion at a rate of 33% which would result in federal taxes of $16,500. That’s more than twice the taxes due when you are in a lower-income year. Now, you may not have taxable income fluctuations. But, for those who are self-employed, change jobs, and have a loss of income, or have investment losses where taxable income is lower than normal for a year, you should think about converting your retirement funds to Roth. You may not have a more affordable time to make the Roth conversion.

3. Potential Need for a Distribution After Five Years – One of the perks of Roth accounts is that you can take out the funds that are contributed or converted after five years without paying tax or the early withdrawal penalty (even if you aren’t 59 1/2). For Roth conversions, the amount you convert can be distributed from the Roth account five years after the tax year in which you converted. The five-year clock starts to tick on January 1st of the tax year in which you convert, regardless of when you convert within the year. So, if you converted your traditional IRA to a Roth IRA in November 2020, then you could take a distribution of the amounts converted without paying tax or penalty on January 2nd, 2025. If you try to access funds in your traditional IRA or 401(k) before you are 59 1/2, then you will pay tax and a 10% early withdrawal penalty even if the amounts you distribute are only the contributions you put in, not the investment gains. Clearly, the Roth account is much more accessible in the event you need personal funds. Keep in mind, you don’t get this perk immediately: You have to wait 5 years from the tax year in which you converted before you can take out the converted amount tax and penalty-free.

One final thought to consider when converting to a Roth is that there are no do-overs. You used to be able to do what was called a Roth re-characterization where you could undo a Roth conversion but the ability to undo a Roth conversion was eliminated in 2018 forward. As a result, make sure you’re committed before you convert as there are no mulligans, do-overs, or re-characterizations anymore. Also, if you want the conversion to fall onto your current year’s tax return, then make sure you convert those sums by December 31.